Proton Beam Therapy – The Future For Treatment Of Prostate Cancer?

On April 19th. KWPCSG’s Zoom meeting open to all our members was devoted to proton beam therapy (PBT), an exciting alternative treatment for prostate cancer with very few side effects.

Championing the new development was Timon Colegrove, one of the first PC patients to be offered this treatment in the UK. His talk, presentation and responses to questions last 50 minutes and we would urge members to watch it on the KWPCSG website.

Timon described himself as ‘a burnt-out 56 year-old man’ when he gave up his  very demanding business and was due to settle for a quieter life in 2017. He  decided to treat himself to a full body medical check, which included a PSA  test. A reading of 5.2 meant little to him, having no adverse symptoms, but an  MRI scan at the Churchill Hospital showed shadows in the prostate area and  the need for a biopsy.

Expecting to get the all-clear he and his fiancée were devastated to be told he  had cancer and a Gleason score of 3+4. Now the serious research started,  with alarming statistics showing a 40% risk of both impotence and incontinence  as side-effects of a prostatectomy, radiotherapy or brachytherapy. Timon then  met up with four friends who had been treated for prostate cancer, all of whom,  he then discovered, were now impotent

Disheartened by his findings he attended his first Oxfordshire PCSG open  meeting. This turned out to be what he described as a life-saver, The speaker  was Professor Karol Sikora, a British physician specialising in oncology, a  leading world authority on cancer and the founder of Rutherford Health, and  his talk was on proton beam therapy, a concept Timon had not come across  while researching NHS PC treatment options.

Basically traditional radiotherapy, though greatly improved in recent years,  involves photons which enter and depart the body hot and at full intensity,  leading to collateral damage to healthy tissue. Proton beams enter the body  at low charge, zap the tumour, then stop, greatly reducing the potential for  further damage. It is also more accurate through pencil-beam scanning and  can target moving tumours. 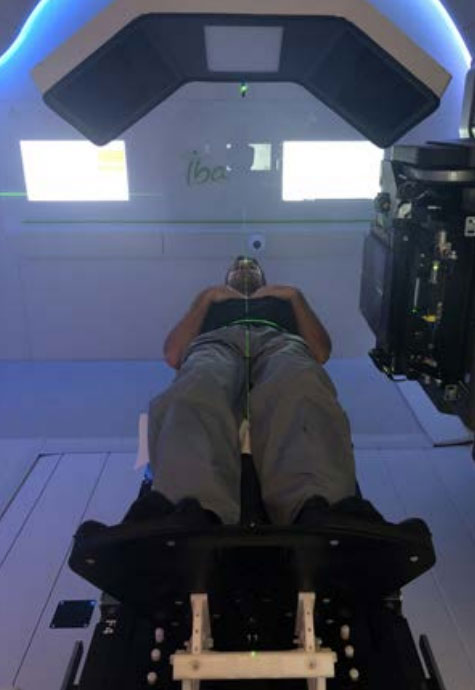 With a wedding planned and no desire to  take the risks inherent in the traditional PC  treatment (radiotherapy, chemotherapy,  surgery) Timon decided to sign up for private PBT (no NHS facility being available to him) at the Rutherford Centre in Newport,  South Wales. Treatment was not dissimilar to radiotherapy – 20 fractions spaced over  4 weeks with a full bladder (remember that,  fellow radiotherapy patients?).

The side effects? Bladder problems in the  final week of the treatment, dry ejaculations and considerable damage to Timon’s bank account. When questioned about the outlay, Timon reckoned it was about  £30,000. Since his treatment in 2018 PBT  is now being administered with double the power over just 10 fractions. Trials are also underway for just a single ‘flash’  treatment, so the cost of the treatment is falling and Timon’s hope is that, with more data and positive outcomes, it will soon be available on the NHS.

Timon’s willingness to go out and talk to PCSGs and at any forum where men  of a certain age or their partners will be prepared to think about such emerging  alternative (at present) or perhaps mainstream (in the future) treatment is  borne out of his conviction that the traditional side effects of present NHS  treatment can be life-changing. In time this may be viewed as far too high a  price to pay in terms of quality of life. .

‘My view is that years 50-70 still constitute youth, the 80s are the new middle  age and 90s can be termed old age.’ With that outlook it’s no surprise that  Timon provided us with one of the most compelling case studies we have  heard with determination and positivity guiding his actions. I’m sure we would  love to invite him back in a couple of years for an update on his life and the  development in the UK of proton beam therapy.

For more information about Timon’s patient experience or proton beam  therapy please go to www.menaretalking.co.uk or check out the Men are  Talking Facebook group. Anyone wishing to contact Timon directly can do so at timon@menaretalking.co.uk .