After 9 months of excellent treatment by the NHS involving MRI scans, biopsy’s, a neuroscan and 7.5 weeks – 37 fractions of radiotherapy I decided to give something back.

I joined the Kidderminster prostate cancer support groups committee in Nov 2015 and was invited to join the Rory appeal committee to introduce the appeal to the retail sector due to my Shell retail background. 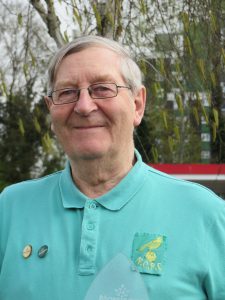 I work part-time at the Morrisons store in Bromsgrove, so I decided to approach the foundation for a grant and plan and implement a campaign of store events. In Jan 2016 I presented a case to Morrisons Directors and the case was forwarded to the trustees of the foundation. The campaign covered 11 stores in Hereford and Worcestershire, and some 15 events included bucket collections and in key stores, bag-packing by key celebrities was agreed by Morrisons senior management.

In March I was informed the trustees had awarded me with a grant of £25000 still the highest awarded to date to a charity! By the end of 2016 the 15 stores had achieved £15,585 over £ 4000 per event and the climax of the campaign was a major event at the Alexandra Hospital – significantly attended by the NHS management, leading oncology and urology surgeons and consultants and the CEO of Morrisons. The new Mark IV robotic machine, at the manufacturers expense, was on show and the media coverage from this event resulted in two large donations of £10,000 each from two benefactors.

In total during the campaign 4 live local radio programs and 26 Press articles created awareness for prostate cancer and the Rory appeal.

The campaign has now finished with a fund figure of £60,585 and the Rory Appeal has raised including the Morrisons sum over £325,000.

The robotic machine will be installed at the Alex in late June but still over the next 5 years £700,000 will have to be raised.

On a referral note my wife and I and friends have visited the houses of parliament at the invitation of Nigel Huddleston, my local MP, where we met Robin Walker the Brexit minister and Worcester MP.

To encourage the business community of the County to get involved on the Rory Appeal I organised a business conference at Worcester Bosh HQ. involving presentations from Robin Walker and leading surgeons, and consultants who will operate the Robotic Machine together with patients who have had a radical prostatectomy, for the removal of the prostate.

It is too early to evaluate the success of the conference but at the conference, Worcester Bosch donated £3000 and the Malvern Freemasons, £3000. 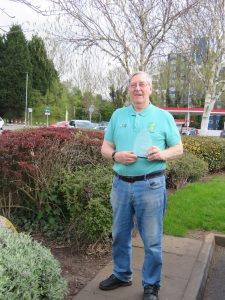 I recently attended the Morrisons teamwork conference at the Harrogate international conference centre and was awarded a gold badge and plaque for outstanding fundraising in the community.

My journey has now ended regarding fundraising and it’s back to paying bridge and walking my dog the extra mile.